It is so important to watch those bank accounts, especially if you have any accounts that you don’t use that often!

Part of my car insurance claim from April’s accident includes tax and title reimbursement on a new vehicle purchase. Since this check came after I moved, I had to relay my new address to the insurance company. When I called to inquire about the check after not receiving it in the given timeline, I found out they recorded my new mailing address wrong. They were going to stop payment on that check and issue a 2nd check.

About a week later, I get a check in the mail from the insurance company I cash it, pay some bills and go about my business. 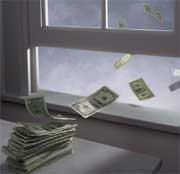 It didn’t occur to me that the check I already cashed could have been the stopped one….until this morning….YIKES! I logged in and my suspicions were confirmed, the check had been stopped and the activity on the account had been adjusted for….fortunately the only activity is a small car loan with the same bank. So in a few hours, I’ll head over and hopefully get the whole situation cleared up. I have the “new” check, so hopefully I can clear this matter up by talking to a branch representative. I’ve been using the term bank, but it’s actually a credit union.

What I did wrong:

What I did right:

Fortunately, this particular account is a sort of alternate account. There isn’t too much daily activity so there isn’t a trail of overdraft fees, stopped or missed payments. Accounts that are not used on a regular basis tend to get overlooked. I prefer to decentralize my finances, but keep all accounts within my scope. If you have multiple accounts, but sure to check up on them from time to time for unexpected activity.

Maybe you could look into getting a basic bank account alternative with thinkmoney – they don’t have an overdraft facility and don’t offer any form of credit, so there’s no risk of going overdrawn.

What about you? Have you ever overdrafted as a result of a stopped check/payment? How was it resolved?

Sorry to hear that. Overdrafts can affect your credit. You should always take a peak at your credit report to make sure your FICO score is still good. Don’t get yourself put into a bad credit situation.

I use to overdraft 2-3 times a month. At $34 each its gets expensive. Such a waste of money. Took me some time and lots of work, but I stopped doing it. Expensive way to learn a lesson. Sometimes I am hard headed and a little slow. lol

Before I pay any bills or hit the ATM, first this I do is check online how much money I have to work with.

Financial Bondage, at my work we’ve noticed that alot of our clients are INSOLVENT!!! because of overdraft fees. Many have 5 or 6 automated payments comming out and when they only have $30-60/month to spare, after the first month they can’t catch up. To make maters worse the standard bounced payment in Australia is $50 so 6 missed payments is $300 for someone who’s struggling to pay their debts
.-= Benjamin Bankruptcy´s last blog ..Budgeting apparently I need to do it- =-.

I hope that you got everything worked out. Thankfully I think credit unions are usually easier to work with than large banks. At least that is the feel I have at my credit union. I am even thinking of moving my checking account over to the credit union and giving up on huge banks altogether.

Next post: Along the Journey Weekly Roundup #19 ~ Yakezie & GRABBBR Edition